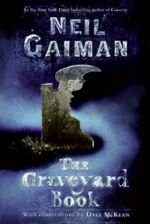 Rattle his bones...
Appear in the poem "The Pauper's Drive" by Thomas Noel (1799-1861). Google Books Wikipedia on Noel These lines have been referenced by everyone from James Joyce to Morrissey. See here

Caius Pompeius
Seems to be a generic Roman name, rather than any specific historic figure.

Raised by ghosts
Gaiman has stated that the title and general plot are an homage to Kipling's Jungle Book: "It's kind of like The Jungle Book, only instead of a jungle it's a graveyard. It's about this 2-year-old whose family is killed, and who is adopted and brought up by dead people..." Source

Nobody Owens
Obviously sounds like "Nobody owns". Recalls the scene in the Odyssey where Odysseus tells the Cyclops that his name is Nobody. Wikipedia

Sleep my little babby-oh
Google searches turn up nothing-- this seems to be of Gaiman's invention.

Lady on the Grey
Seems again to be a Gaiman invention. Possibly a nod to the fantasy short story "Lady on the Grey" by John Collier (1901-1980). Full text Wikipedia

He died in 1583
The queen alluded to would probably have been one of Henry VIII's six wives. Wikipedia

Caledonia
the Latin name given by the Roman Empire to a northern area of the island of Great Britain. Wikipedia

Hounds of God
An interesting example of Gaiman repurposing a (more or less) forgotten English phrase. "Hounds of God" or "Hounds of the Lord" was a name historically given to the Dominican friars. Wikipedia

Gaiman on where he got the idea of using werewolves as Hounds of God: "I'm pretty sure it came from a sentence in Carlo Ginzberg's The Night Battles (Witchcraft & Agrarian Cults in the Sixteenth & Seventeenth Centuries). (Amazon link.) A book I learned about from John Crowley (I wrote about his suggested reading list for fantasy writers here -- and that book was on it)." Neil Gaiman's Journal 4/26/2009

snakestone
Seems to be a Gaiman invention.

here comes a candle...
These lines are from the English nursery rhyme, Oranges and Lemons. Wikipedia A fictional writer in Gaiman's Sandman series wrote a book called "Here Comes a Candle."

"One day. Everybody does."
Gaiman has placed similar statements throughout his works. Examples?

Danse macabre
"Dance of Death is a late-medieval allegory on the universality of death: no matter one's station in life, the dance of death unites all. La Danse Macabre consists of the personified death leading a row of dancing figures from all walks of life to the grave—typically with an emperor, king, youngster, beautiful girl, all skeletal. They were produced to remind people of how fragile their lives were and how vain the glories of earthly life were. Its origins are postulated from illustrated sermon texts; the earliest artistic examples are in a cemetery in Paris from 1424." Wikipedia

"Penny for your thoughts"
A similar exchange appears in the last volume of Sandman, The Kindly Ones, between Morpheus and Matthew the Raven. The two pennies placed on the eyes of the dead appear also in Gaiman's Death: The High Cost of Living. 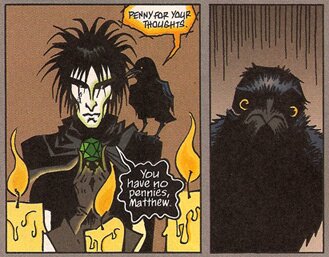 "the tall man had no reflection"
A clue that Silas may be a vampire.

"The open-ended close of The Graveyard Book begs for a sequel, and Gaiman hints that he's keen: "There was of course a Second Jungle Book."" Source