Chapter 12 - Blue Skies Are on the Way

Shakespeare 1623 folio
Although eighteen of Shakespeare’s plays were published individually during his lifetime, the first full collection of his plays, published in 1623, has come be called the First Folio. Of the thousand or so copies originally printed, only 228 remain in existence. It comes up in the epigraph to chapter 87 of Foucault's Pendulum, evidently as evidence that the author of the Folio was an esoteric master and therefore must have been Francis Bacon....

shiver my timbers, hell's bells, saccaroa
Three pirate curses, the first being immortalized by Robert Louis Stevenson's Long John Silver in Treasure Island , and the last a word used by Emilio Salgari's pirate Sandokan. Both of these pirates are part of Yambo's final vision in the last chapter of this book. (Why, shiver my timbers, aso, should saccaroa be in italics and the others curses not? Apart from sakkaroa Eco himself has the first two, 'tuoni d'Amburgo' and 'per mille fulmini', also in plain roman type. Could it be that the italization is a way of giving credit to a - still -identifiable source? 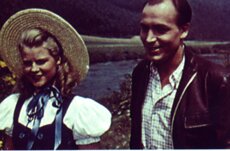 Il Popolo di Alessandria & Ezra Pound
During the war years, Pound became involved in Fascist politics and did not return to the United States until 1945, when he was arrested on charges of treason for broadcasting Fascist propaganda by radio to the United States during the Second World War. In 1946, he was acquitted, but declared mentally ill and committed to St. Elizabeths Hospital in Washington, D.C.

Back to The Mysterious Flame of Queen Loana