Chapter 2 - The Murmur of Mulberry Leaves

the third man
The Third Man, British film from 1949 directed by Carol Reed and featuring Orson Welles, among others. Filmed in postwar Vienna, the plot follows Holly Martins who comes to Vienna in search of his old friend, Harry Lime. Harry famously justifies his wickedness thus:

"In Italy for 30 years under the Borgias they had warfare, terror, murder, and bloodshed, but they produced Michelangelo, Leonardo da Vinci, and the Renaissance. In Switzerland they had brotherly love - they had 500 years of democracy and peace, and what did that produce? The cuckoo clock."

Prater
amusement park in Vienna, scene of the cuckoo-clock speech in The Third Man.

"Napoleon sent Josephine a message telling her not to wash"
Although one of the most charming and oft-repeated anecdotes about Napoleon, this story may be apocyrphal. [1].

The Betrothed
I promessi sposi, an Italian historical novel by Alessandro Manzoni, the most famous and widely read novel of the Italian language. info Eco mentions The Betrothed many times in other works. Misreadings contains a lengthy "overinterpretation" of Manzoni's novel. It is also discussed in Six Walks in the Fictional Woods, where Eco writes, "Almost all Italians hate it because they were forced to read it in school. My father, however, encouraged me to read I promessi sposi before my teachers forced me to, and I love it."

"there's always some imbecile who comes over and says... have you read them all?"
This is a long-standing peeve of Eco's:

"I gave them away to prisons and hospitals"
ditto - Eco makes a mention of this in ch. 39 of Foucault's Pendulum, when Belbo explains what becomes of the novels published by the vanity press his boss runs: the unread review copies of works by SFAs (self-financing authors) are donated to the hospitals and prisons, "and now you know why the former don't heal and the latter don't redeem". [trans. William Weaver]

"I know several languages"
Eco speaks Italian, Latin, English, French, and German very well, and probably many others to varying degrees of fluency. At a [2] in 2002, Eco stated that "to be competent in many languages means to have many souls."

Le brouillard indolent de l'automne est épars
[3] by the same name by Georges Rodenbach; this is the line which came to Yambo on page 3, but in his own language.

Unreal city / under the brown fog of a winter dawn /a crowd flowed over London Bridge, so many / I had not thought death had undone so many
from Poem I of Eliot's The Waste Land; the last line is a translation of Dante, Inferno 3.57. Again. Yambo remembers bits of this poem on. p. 5, but in his own language.

At a turn, an ephemeral sun brightens: a cluster of mimosas in the pure white fog
?

The yellow fog that rubs its back...
Love Song of J. Alfred Prufrock by T.S. Eliot (see next page)

the country house
"Eco and his wife, Renate, and arts educator, have a huge summerhouse -- he describes as "Alcatraz" -- in the remote and craggy hills inland from Rimini. The seventeenth-century manor was used as a barracks for German soldiers in the Second World War, and more recently as a Jesuit-run summer camp for kids from the village. When Eco bought it 20 years ago, "every room had 40 beds!" Now the rooms contain the surplus from Eco's 30,000-volume library in his home base in Milan, and the chapel has become his workroom." From a 1995 [7] with Vogue. (But in no way should the reader think that this "Alcatraz" sheds any light on the book's Solara country house.)

"I was born... during the Christmas holidays of 1931"
Eco was born on January 5, 1932 in a small city east of Turin and 60 miles south of Milan in the northwestern province of Piedmont. [8]

grandparents
Eco’s paternal grandfather, Giulio, claimed to be a foundling, and that he was given the name Eco by “an inventive civil servant.” Supposedly the name is an acronym for ex caelis oblatus, or “offered by the heavens.” Giulio married Giovanna Bisio, and Umberto remembers his grandmother fondly; he claims that he developed his delight in the absurd from her peculiar sense of humor. [9]

"two full years, from 1943 to 1945"
"When the second World War broke out'', Eco and his mother moved to a small Piedmontese village in the mountains." [10] Jacopo Belbo in Foucault's Pendulum was evacuated at the same age to what seems to be the same house. (Mr. Ruch must be wrong a bit, since the 2nd world war broke out in 1939. In '43 nothern Italy's Republic of Salo came under Allied attack, that's why they left the city for the country-side.)

"The yellow fog that rubs its back upon the window panes, the yellow smoke that rubs its muzzle on the window panes, licked its tongue into the corners of the evenings, lingered upon the pools that stand in trains, let fall upon its back the soot that falls from chimneys, curled once about the house and fell asleep."
From The Love Son of J. Alfred Prufrock by T. S. Eliot. This quote also appears in Eco's Foucault's Pendulum on page 411 in the trade paperback and page 341 in the standard paperback (chapter 73, Belbo's "wild play of quotations")..

Conrad Veidt as the Laughing Man and Mary Philbin as the blind girl who loves him.

"what made you marry the laughing man?"
Presumably a play on Italian sorriso (smile, Yambo's "irresistible smile") and "riso" (laugh). The Laughing Man (L'homme qui rit) is a novel by Victor Hugo which will figure later in the novel, particularly in Chapter 17. 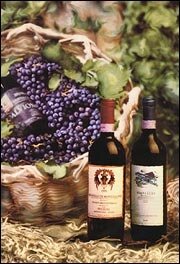 Brunello
is a red wine, produced in the vineyards surrounding the town of Montalcino in Italy. Brunello is one of the most well-known (and expensive) wines of Italy, comparable to France's great Bordeaux wines.

Laphroaig
(pronounced La-froyg) a single-malt whiskey (or rather: whisky) from Islay, a famous whiskey-producing region of Scotland. In Foucault's Pendulum, ch. 8, the narrator remarks that Ï could write the political history of those years [1970s-80s] based on how Red Label gradually gave way to twelve-year-old Ballantine and then to single malt" in the bar he had frequented as a revolutionary wannabe.

Combray
the fictional town of the narrator's youth in Proust's A la recherche du temps perdu. In Proust, biting down on a madeleine, a tea biscuit, evoked a cascade of memories.

Gitanes, papier maïs
Gitanes is a brand of strong French cigarettes. Papier maïs is a yellowish paper made from maize; they are still available in filter or plain versions (though to smoke filtered maïs is considered cowardly). The "Gitane" of the brand name is a gypsy-woman depicted on the packet in a famous [11] by Marcel Ponty.

"You can only anticipate the future if you can call the past to mind...
I'm holding a long note, like a stuck record, and since I can't remember the opening notes, I can't finish the song" - Perhaps Eco's reason for writing this book? (Well, this theme of lack of continuity, even of meaning to one's next move, is indeed a recurrent one. It's already the very start of this chapter.)

Augustine's Confessions
the selection quoted is from Book X, 17

Dioscuri
the Dioscuri were Castor and Polydeuces (or Pollux), the twin sons of Leda and Zeus and the brothers of Helen of Troy. Because Zeus came to Leda in the form of a swan, they are sometimes presented as having been born from an egg. Pollux was a formidable boxer, and Castor was a great horseman. Together, they were the "Heavenly Twins," often associated with the constellation Gemini. [12] 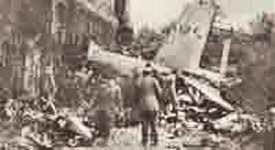 "plane carrying the Turin team had gone down"
On May 3, 1949, Torino played a charity match in Lisbon, Portugal. Returning home the next day in dense fog, the team's propeller-driven plane crashed shortly after 5 p.m. into the back wall of the basilica, high on the ridge of the hills east of town. More than 500,000 people turned out for the funeral.

Hypnerotomachia Poliphili
- or, "Strife of Polia's Lover in a Dream" is a romance attributed to the Dominican friar Francesco Colonna (1433-1527). It is the story of a man who falls asleep and in his dream searches for his lover (this should sound familiar). Above, a series of images showing an incident of the hero swooning and reviving in a woman's arms. Umberto Eco owns the 1499 Aldus Manutius edition; this book is famous as a beautiful early printed book, using the Bembo typeface. This enigmatic book remains one of the most valuable antique books available and served as inspiration for the recent novel, The Rule of Four by Ian Caldwell and Dustin Thomason. Much of the mystery of this book has to do with the fact that it was published anonymously but the authorship was revealed in an acrostic--the first letter of every chapter string together to read: POLIAM FRATER FRANCISCVS COLVMNA PERAMAVIT or "Brother Francesco Colonna dearly loved Polia." Many assume that there are more codes in the book. In a Europe article, Eco discussed his familarity with Hypnerotomachia Poliphili. This has lead some to believe that may be a code in The Mysterious Flame of Queen Loana.

"The distinctive scent of bitter almond"
First line, Love in the Time of Cholera by Gabriel Garcia Marquez

"If wishes were horses, beggars would ride"
common saying, part of a nursery rhyme

"Often have I encountered the evil of living"
poem by Eugenio Montale, "text (English)

Aldo Moro, the parallel convergences
Aldo Moro (1916-1978), twice Prime Minister of Italy and prominent leader of Democrazia Cristiana (DC, in English the Christian Democrats). He was kidnapped and killed, allegedly by militants from the Red Brigades. "Parallel convergence" was a 1960 strategy of associating the Italian Communist Party (PCI) with government responsibilities, along with the DC, in a "national solidarity" cabinet.

plane that crashed into the Banca dell'Agricoltura in Ustica
Yambo combines two tragedies. In December, 1969, a bomb at Milan's Banca dell'Agricoltura killed some 14 people; see a site for details. Apparently the bombing was an attempt by fascist extremists to stir up unrest and fear of Communist thuggery. In a separate incident, in 1980, an Italian plane mysteriously crashed into the sea near the island of Ustica. To this day, conspiracy theories abound, including the possibility that it was accidentally shot down by NATO forces who were targeting a plane carrying Colonel Qaddafi of Libya. [13]

TV series about family tragedies in Texas
Dallas, no doubt, in dubbed reruns?

"I had just finished the gelato..."
The anecdote about throwing away the tip of the cone appears in the essay "How to Eat Ice Cream," which is collected in "How to Travel with a Salmon."

image. "Leonardo da Vinci's female faces are particulalry elusive and inscrutable: this can be seen clearly in the Lady with an Ermine, where a deliberately ambiguous symbolism is expressed by the lady's unnaturally long fingers, which caress the animal. Nor does it seem fortuitous that, in this very portrait, Leonardo opted for freedom of proportions and realism in his depiction of the animal." Eco, History of Beauty, pg. 193.

a Dekobra novel
Maurice Dekobra (1885-1973), one of the world's most popular novelists during the interwar years. Among his novels is one set on the Orient Express, La Madone des sleepings.

Back to The Mysterious Flame of Queen Loana